Heather Jansch (1948 – 2021), was a renowned British sculptor whose lifelong passion was to achieve mastery of the equine form.

“Heather is a genius with an eye for nature that in another generation would have seen her burnt as a witch; now she is rightly considered one of our country’s finest artists. If you were to ask the visitors to Eden, ‘What is your favourite work here?’ it would be the horse, and we gave the entrance to our kingdom to this horse. Richard III, see it and weep.”

Her pioneering use of driftwood as a medium was frequently copied, but rarely rivalled.

Jansch spent many years perfecting the complex translation of her original driftwood works into bronze, establishing a technique that often made them indistinguishable from the original.

Her work is held in collections across the world.

Sculpture – Forget Me Not

Heather Jansch was a sculptor who specialised in equine figures in driftwood and bronze. She died in July 2021 at the age of 72.

From an early age she was inspired by the drawings of Leonardo da Vinci and her lifelong passion for horses ran parallel; her childhood sketchbooks were crammed with studies of ponies. She studied fine art at Walthamstow Technical College and at Goldsmiths, University of London.

Born Heather Sewell, she married the renowned folk musician, Bert Jansch, in 1968 and they moved to a remote hill farm in Wales where Heather bred Welsh Cobs. During this period, which she described as her apprenticeship, Heather developed a profound understanding of equine behaviour and anatomy. She also became skilled at understanding the minute differences between closely related breeds. Her command and accuracy were fast noted by breeders, with whom her early traditional equine portraits in oils became much in demand. 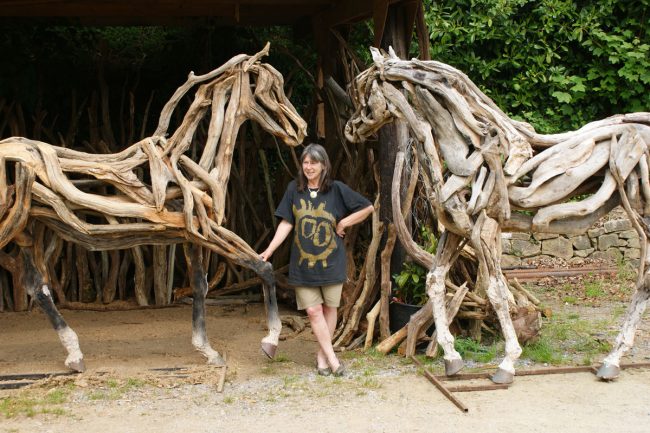 A Change of Style

After ten years in Wales (having separated from Bert in 1974), Heather settled in South Devon in 1981 and a new style emerged in her painting, with vibrant colours and increasingly impressionistic canvases. She felt a restless drive to push her art in a new direction. Experimenting and expanding her subject matter, she began working in three dimensions, firstly in copper wire and plaster. But she often felt frustrated that her early sculptures lacked power, vitality, and the life force she could see in her equine subjects.

The breakthrough came when she began working in driftwood, abundant on the beaches of Devon. Driftwood was the key that unlocked her creativity and marked the beginning of a huge artistic output. 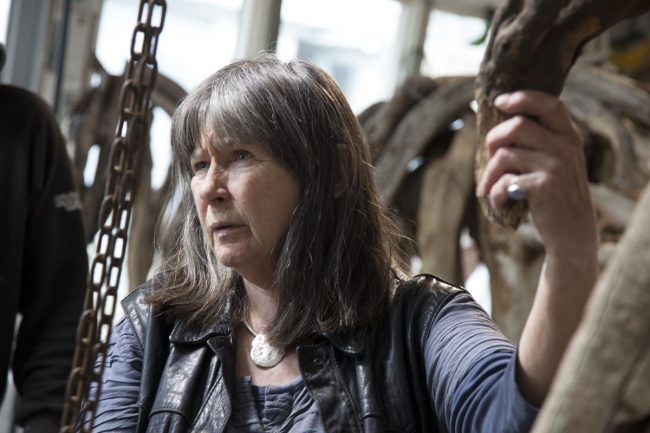 Heather was chosen to be represented in the Salisbury-based ‘The Shape of the Century’ exhibition in 1999, and the show transferred to London Docklands as part of the Millennium celebrations in 2000. As a consequence, Tim Smit, founder of the Eden Project, invited her to become its artist-in-residence. Her first pieces created within the Biomes there included cork pigs and storks. Then she created the life-size driftwood horse that became known as the Eden Horse. Its new scale and ambition took her work to another level and brought recognition from a wider international audience.

The limited durability of driftwood when kept outside (the natural environment for life-size sculpture), was becoming an issue. Heather collaborated over several years with skilled mould-makers at a fine art foundry, at last finding a seminal new method of casting highly complex forms in bronze. The resulting casts brought a new permanence and gravitas to the work. 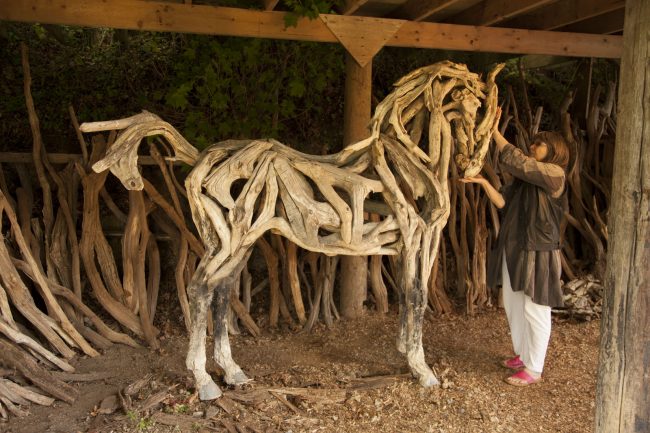 A move to a converted coach house near Exeter with 14 acres of woodland and water meadows provided an ideal setting for her work. She regularly opened her gardens as part of Devon Open Studios and the National Garden Scheme, where thousands of people viewed her sculpture over the years.

Heather exhibited frequently in the UK and internationally. Her work is held in private collections throughout the world.

Heather’s work can be found in private collections throughout the world, and can currently be seen on public display at:

Diehl Gallery, Jackson, Wyoming, USA
Diehl Gallery was founded by Mariam Alaskari Diehl in 2001 and offers fine art and professional art collecting services for new and established collectors, both private and corporate. Diehl Gallery specializes in the acquisition and sale of contemporary art, with a focus on painting and sculpture. The gallery moved to its current location on Broadway in a newly renovated, contemporary space in the spring of 2008.

“Every work is impressive, whether featuring dynamic movement or the subject in repose. The proportions are very similar to their real-life counterparts. The texture and form of the driftwood only adds another level to the pieces. Incredible! …”

“What an eye this lady has; every contour of a real horse is right there…”

“I’m always in awe of people who can draw horses. So, imagine my reverence when when I was shown Heather Jansch’s incredible body of work. A woman who can obviously not only draw beautifully, but also make life-size equine sculptures with an enviable precision and confidence…”

“From a distance they are the embodiment of equine grace, three creatures ready to burst into a gallop across the sands…”

“Heather Jansch can frequently be seen walking along the beach, eyes peeled for the bits and pieces of wood that come in on the tide. Woman’s Hour joined Heather in South Devon to find driftwood material for her latest sculpture…”

Gallery and exhibition curators, please contact us at: exhibitions@heatherjansch.com